A replica of the Ilford Mammoth skull that was found on Ilford lane during an excavation in 1865 will remain in Redbridge Library for a further five years at least.

The £50,000 replica was donated to the East Ilford Betterment Partnership (EIBP) in 2015, a group that Wilson Chowdhry founded and currently chairs. The replica was received from the Natural History Museum and was once displayed in their Mammalian Section, but was to be shelved during a rehaul of the Museum (click here).

Mr Chowdhry and his daughter Hannah led a campaign to have a similar replica made for our town centre and placed in a glass box, but lack of planning permission thwarted this idea.

However, after EIBP agreed to cover costs for the skulls installation and transport to Ilford Library and funds towards a two year Ice age exhibition at the cost of around £2000, the Museum management team agreed to place it there for two years while they ran an exhibition and the Natural History Museum gifted the skull to the EIBP.

The two years have since expired and Redbridge Library have now recognised the value of the replica relic and today Mr Chowdhry, signed a contract to see the replica skull displayed in the library for a further 5 years.

Two weeks ago Wilson and Hannah's contribution to bringing the mammoth back to Ilford was finally recognised by the library, when they expanded the noticeboard text referreing to the mammoth to include their struggle to bring the expensive replica to Ilford. 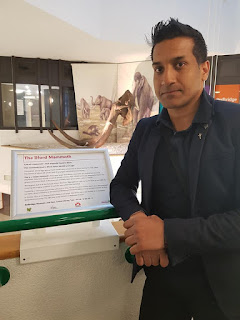 "I have been working on local projects in Ilford for so long now, sometimes I feel as if I am as old as the mammoth.

"I am glad that the mammoth skull replica is being used to remind local people of our valuable heritage, especially the younger next generation who will no doubt be inspired by our great history.

"I have not stopped my plans to have a town centre representation of our mammoth history and hope one day the Ilford Mammoth skull which contributed to the global understanding of the pleistocene period, is commemorated more publically near where our mammoths once roamed."

Hannah Chowdhry, who first thought of bringing the mammoth skull to ilford, said:

Bringing the relic to Ilford was satisfying, from a young age I have always been proud of our town.   Our pre-history which is so colourful and second to none, deserves to be recognised more prominently and the replica skull certainly makes that history more palpable.

"I just wish more young people visited Redbridge library and museum so that word of our great past could inspire more of our next generation.  I am surprised at how few of my school friends at Kantor King Solomon know much about the Ilford mammoth. A historical defecit which can be felt in many schools in the borough." 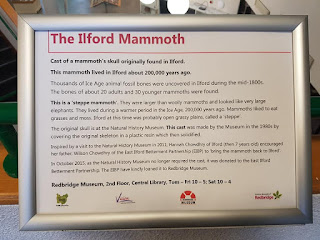 Mr Chowdhry had previously installed a plaque at Ilford Methodist Church, which is said to be the richest location of ice age fossils in the world (click here for Ilford Recorder article)